Abstract Bees have a diverse instinctual repertoire that exceeds in complexity that of most vertebrates. This repertoire allows the social organisation of such feats as the construction of precisely hexagonal

Bees have a diverse instinctual repertoire that exceeds in complexity that of most vertebrates. This repertoire allows the social organisation of such feats as the construction of precisely hexagonal honeycombs, an exact climate control system inside their home, the provision of the hive with commodities that must be harvested over a large territory (nectar, pollen, resin, and water), as well as a symbolic communication system that allows them to inform hive members about the location of these commodities.  However, the richness of bees’ instincts has traditionally been contrasted with the notion that bees’ small brains allow little behavioural flexibility and learning behaviour. This view has been entirely overturned in recent years, when it was discovered that bees display abilities such as counting, attention, simple tool use, learning by observation and metacognition (knowing their own knowledge). Thus, some scholars now discuss the possibilities like consciousness in the bees. These observations raise the obvious question of how such capacities may be implemented at a neuronal level in the miniature brains of insects. We need to understand the neural circuits, not just the size of brain regions, which underlie these feats. Neural network analyses show that cognitive features found in insects, such as numerosity, attention and categorisation-like processes, may require only very limited neuron numbers. Using computational models of the bees’ visual system, we explore whether seemingly advanced cognitive capacities might ‘pop out’ of the properties of relatively basic neural processes in the insect brain’s visual processing area, and their connection with the mushroom bodies, higher order learning centres in the brains of insects. 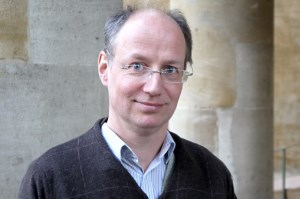 Lars is the founder of the Research Centre for Psychology at Queen Mary, University of London. Work in the Chittka lab is poised at the intersection between sensory physiology and learning psychology on the one hand, and evolutionary ecology on the other. Why do animals have the sensory systems they do? How do they use them in their natural foraging environment? How do cognitive-behavioural processes function in the economy of nature? Pollinator-plant interactions have been used as a model system to study these questions. Bees have been the organisms of choice in most of these studies, because their colonies can be easily kept, their experience can be readily controlled, they have a rich behavioural repertoire and amazing learning capacities. Members of the team have been particularly interested in mutual evolutionary and ecological influences of insect colour vision and flower colour signals, and insect learning and flower advertising. In addition, they have studied bee navigation, including the question of how bees use spatial memory to navigate among several rewarded sites. Recently, Lars has also become interested in the evolution of cognitive capacities and communication, and the pollination biology of invasive species. Work in the Chittka lab has made use of field studies, as well as experimental studies with computer-controlled behavioural tests, computer simulations, and phylogenetic analyses.