The evolution of elaborate nest structures in birds

Abstract Intricately woven ‘pendant’ nests built by some species of weaverbirds (Ploceidae) and icterids (Icteridae) are among the most complex structures built by animals, yet why they have evolved convergently in

Intricately woven ‘pendant’ nests built by some species of weaverbirds (Ploceidae) and icterids (Icteridae) are among the most complex structures built by animals, yet why they have evolved convergently in the two families remains largely unexplained. Anecdotal accounts suggest that nests suspended below branches with entrance tunnels hinder attacks by arboreal snakes, while entrance tunnels may also restrict access by brood parasites, but these ideas have yet to be systematically tested. Using a phylogenetic comparative approach, we test the prediction that across weaverbird and icterid species, suspended nests and entrance tunnels are associated with a large degree of native range overlap with arboreal snake predators and brood parasites. Further, we test the related prediction that such structures are associated with greater parental investment due to reduced offspring mortality. Geographic biases currently complicate analyses based on range overlaps with snake species, but we do find some predicted relationships between nest structure and overlaps with specific brood parasitic species. We also find that suspended nests in both families, and entrance tunnels in weaverbirds, are associated with relatively larger eggs and longer periods of parental care. Our current results suggest that elaborate nest structures can reduce offspring mortality risk and facilitate selection for greater parental investment. Surprisingly, our findings also suggest that such nest structures may defend primarily against invasions by brood parasites rather than snakes, although additional spatial data for snake species are required to confirm this. We conclude that nest design may play an as-yet-unappreciated role in the diversity of life history strategies across species.

Sally is an assistant professor at Durham University. She is an inter-disciplinary researcher 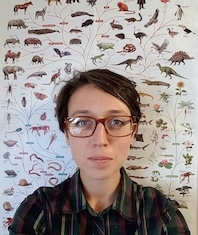 interested in understanding large-scale patterns and processes in the evolution of behaviour, cognition and culture. She is primarily a ‘macro-evolutionary anthropologist’, placing broad questions on the evolution of our species’ extraordinary cognitive and cultural abilities in the wider context of vertebrate evolution. Sally typically investigates such questions using phylogenetic comparative statistical methods, which model how characteristics of species or populations have evolved across large temporal and spatial scales. She has a particular interest in the evolution of technically skilled behaviour, especially musical ability, tool use and construction. Along with exceptional cognitive and cultural capabilities, our species is characterised by uniquely developed technical skill, allowing us to perform a huge range of behaviour in our daily lives: from making tools and handicrafts, using technology and preparing food to performing music and dance. She is interested in why highly developed technical abilities have evolved in humans, how we learn and pass on these skills to others, and what we can learn from relevant behaviour in non-human species, especially tool use and nest building in birds and mammals. She is also interested in questions about human perceptions of non-human species, particularly in why we ‘prefer’ some species over others as pets or food sources, and the consequences of these preferences for conservation.