Can we scale reef restoration?

Abstract: Can we scale reef restoration? Coral reefs are critically important ecosystems. They support 25% of all marine life and provide essential goods and services to an estimated one billion

Abstract: Can we scale reef restoration?

Coral reefs are critically important ecosystems. They support 25% of all marine life and provide essential goods and services to an estimated one billion people, including many of the world’s most vulnerable.  Australia’s iconic Great Barrier Reef (GBR) is the largest living structure on earth and one of the seven natural wonders of the world. The reef spans 2300 km, and with more than 600 coral species it is one of the most unique and biodiverse environments in the world. Along with Uluru and the Opera House, the GBR is seen as synonymous with Australia. However, the GBR is under severe threat. Increasing pressure from rising sea temperatures, adjacent land use, pollution, over-exploitation and ocean acidification threaten the existence of the reef over the coming decades. Unprecedented coral bleaching in two consecutive years has impacted corals along two-thirds of the GBR. Cyclone damage is another major threat. In March 2017, cyclone Debbie devastated the reefs in the Whitsundays. It is estimated that the GBR lost 50% of its shallow coral cover in less than two years. Given enough time between disturbance events, coral reefs can recover, however the increasing frequency and severity of mass bleaching and cyclones, alongside impacts of outbreaks of the coral-eating crown-of-thorns starfish, has put the reef on a path of ongoing decline. Maintaining this valuable asset into the future will require bold and active intervention.

As the world is locked into a trajectory of global warming, and the reef’s natural capacity to recover has diminished due to the cumulative impacts of disturbances, a sustained strong commitment for long-term climate mitigation needs to be complemented with an expansion of the GBR management options. The ‘toolbox’ for reef management must now include targeted actions that actively support recovery, rehabilitation, repair and restoration of coral reefs. A UNESCO draft report in June 2017 stated the need for a review of the effectiveness of the GBR Reef 2050 plan in response to the influence of the mass bleaching events, particularly in relation to the “urgently needed measures and improvements that contribute to the property’s resilience.”

There are four key challenges in ensuring the ecological and economic value of the GBR can be retained:

1.            Solving the bottlenecks for large scale reef restoration at an ecologically relevant, reef-wide scale that is economically feasible and best ensures subsequent survival of restored reefs;

3.            Gaining social and cultural acceptability for reef interventions through extensive consultation and formation of enduring partnerships with local communities and businesses; and

4.            Supporting a reef that delivers key ecological function and maintains its socio-economic values beyond 2030

The reef Restoration & Adaptation Program (RRAP) will be built around a core set of step-change intervention concepts that are analogous to “treatment” and “prevention” concepts in medicine, and in bush regeneration projects to mitigate extinction of flora and fauna. For example, the management of most terrestrial environments nationally include active interventions such as controlled burns, large scale pest eradication, and re-vegetation. I am particularly interested in whether epidemiological and invasive biology models could provide insights into how interventions (e.g. assisted evolution of the coral and/or the algal and microbial symbionts within the coral) could be scaled up across individual reefs and even the whole of the GBR (2500km). The innovation is that epidemiological and invasive biology models generally look at the barriers and processes that determine whether an organism is able to spread through a population/ecosystem. In effect these concepts could be used to assess the characteristics of novel interventions (biological, engineering and social) that would facilitate its spread. The other key area linked to this concept is how to assess the spread, in effect the invasion, of the new intervention across the system. This would require models a 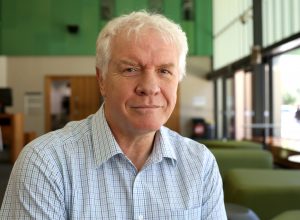 nd methodologies that sample for rare occurrences spatially and map the invasion front.

Prof Iain Gordon (Australian National University) is visiting St Andrews on a  Global Fellowship for the months of April.